Libertines, swingers, hedonists… Libertine philosophy exists since the 17th century in France and especially in Paris. In 2014, I heard about the anniversary of the Marquis de Sade’s death (1814) in the news and I decided to investigate the secret world most people describe as immoral. I spent about 7 months obtaining access to this community, working to be accepted and finally to be able to take photos. I discovered a world where women are greatly respected and very strict rules apply. It’s far from what most people think it is. An event organizer and several couples gave me access to amazing swinger private dinners with chefs in castles, and also to secret clubs including one inside an airplane!

In France, netechangisme.com is the most popular website with about 100,000 active members and 300,000 unique visitors each day. “Most members are couples around 35/45 years old, but recently more 25 year old couples are joining”, explains Christophe Soret, the site’s marketing director. “Internet made it easier and women began to take more initiative. In the past, men would ask their wives to enter the libertine world, but nowadays ladies fully accept their role and initiate new rules with more frivolity.”

Most libertines want to keep their secret, but one young couple, Pierre (35) and Amelie (30), decided to break the rules and accepted to be photographed without a mask. They wanted to prove that swingers are normal people and not weirdoes. “We are not doing anything bad, explains Pierre. We have a happy sexual life together, but once or twice a month we diversify the pleasure. Nothing more…” Amelie met Pierre 2 years ago and admits she always had the Libertine fantasy. They decided together to give it a try and enjoyed it. “I feel our relationship is more honest than those that commit adultery. We have full trust in each other and we experience everything together. We want to show that a healthy, balanced and in-love couple can be Libertine”, adds Amelie. Most of their friends do not share the same love of shared sexual experiences. . “We don’t want to convert people. It’s not for everyone,” concludes Pierre. 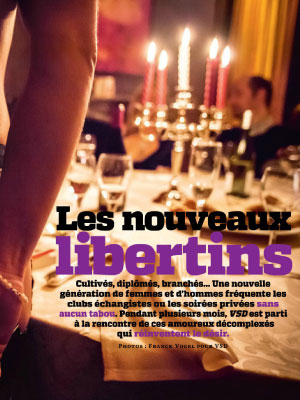