In the French Alps

Ever since I was a child, I have always been attracted to trees and the forest - I dreamed of becoming a forest ranger. I understood very early on that the beauty of the trees and the richness of the biodiversity make it an exceptional place, but I also realized its fragility. This photographic project with the Fonds de dotation Botanic (Botanic Endowment Fund) therefore seemed obvious to me. By associating myself with the poetry of French novelist Irene Frain's texts, I wanted to give voice to the Forest, this unique, immense being, essential to our survival. And to raise awareness, we imagined together his secret life, joys, sorrows, encounters, wisdom, hopes.

This first series is presented in all Botanic stores in France from the beginning of December 2022 and was produced in the French Alps.

Irène Frain is a famous French writer. Environmental issues are very present in her novels, including "La Forêt des 29" (The Forest of the 29), a novel devoted to the epic of the Indian community of the Bishnois, during which she became friends with Franck Vogel. 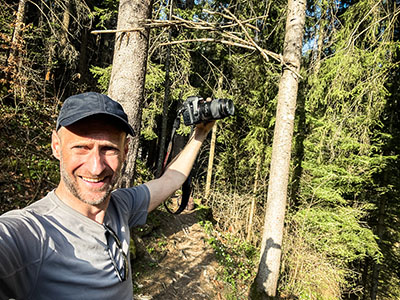 Information on exhibitions in the Botanic stores in France.

BONUS
- Franck Vogel's Interview on the project (in French)